Love in the Lab: Top 5 Historical

The most esteemed thinkers of ancient Greece and Rome had sex on the brain — a lot. And it isn’t any wonder, really, considering that the human instinct to mate is as potent a drive as hunger pangs in the belly or a parched tongue in need of liquid relief. Moreover, back then in the BCs, the birds and the bees know-how that’s taken for granted today remained shrouded in myth and mystery. But that doesn’t mean men didn’t take a stab at sussing out what all of the sexy fuss was about.

Fourth century B.C. thinker Aristotle, for instance, believed that the degree of heat a man produces during sex determines a baby’s sex. If he’s warmer than the woman, a boy it shall be; vice versa gets a girl. Greek contemporary and physician Hippocrates attributed female patients’ mental health instability and anxiety to hysteria, or a wandering womb .And in “Natural History,” written in the 1st century A.D., Roman writer Pliny warned that intercourse would taint lactating women’s breast milk.

As science advanced from philosophy to empirical knowledge over time, groundbreaking discoveries throughout the centuries — like the five on this list — revealed the reproductive equipment inside the human body and even where monogamous love between two sexually active people comes from. 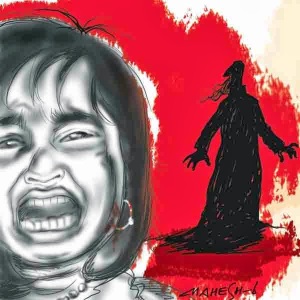 Now I just want to know is she eligible for getting raped that’s not my views but as per few think tanks n intellectual political leader of this nation if a girl do any thing written in those points she is eligible for rape.

She use to go school that was her only mistake in this case…….is that new point which should be added in eligibility criteria for getting raped.

Do men have a stronger sex drive?

Men think about sex every 7 seconds.

No one knows where that long-held popular shorthand for the robust male sex drive came from, but it likely wasn’t from any science lab. According to a 1994 study from Indiana University’s Kinsey Institute, a little more than half the male population — 54 percent, to be precise — daydreams about sex every day or several times per day. Another study published in 1990 in the Archives of Sexual Behavior asked 49 male college students to tally up their sexual fantasies over a week, and the results averaged to just 7.5 sexy thoughts per day, which works out to only once every 3.2 hours .And for a final nail in the sex-crazed coffin, the highest total of sexual-related thoughts among the male participants in a 2011 study at Ohio State University was 388, or once every 3.7 minutes. Statistically, still a far cry from the 7-second assumption.

It would be fallacious, however, to assume that a single measure like frequency of sexual fantasy concretely proves that men have stronger sex drives than women. Accurately evaluating sex drive must also assess the intensity of that motivation to make whoopee. Do men want sex more often and with more partners, compared to women? Statistically, the answer across the board is yes, and evolutionary biologists have some theories as to why.

Can a woman get pregnant during her period?

A scientific argument for why women can’t get pregnant during their periods might go something like this: Since menstruation involves flushing an unfertilized egg out of the uterus, it doubles as a foolproof contraceptive window. But just as a baby’s arrival isn’t as simple as a stork dropping off a special delivery, getting pregnant involves plenty of intricacies and uncertainties. In fact, the menstrual cycle’s variability is a primary reason why having a period doesn’t temporarily render women infertile.

The typical menstrual cycle lasts 28 days, split into the follicular and luteal phases. In a nutshell, the follicular phase consists of a healthy egg developing in the ovaries, while the luteal phase is the post-ovulation preparatory period for that egg to meet up with a sperm in the fallopian tubes. A more detailed daily breakdown of how all of that happens within a single cycle goes as follows:

If, in those final days, a sperm never reaches the released egg, the menstrual cycle begins anew. Otherwise, the wheels are set in motion for pregnancy, and the hormone secretions associated with the luteal phase continue for the following nine months .However, those menstrual markers aren’t identical for every woman, so even though it might appear impossible to get pregnant while on your period, it’s plausible for an expectant egg and an enterprising sperm to meet at any point during the month .

They trowel up
the dust of cadences,
remnants of verbal artistry,
monuments of lofty thoughts
left by the dead souls

I have found them
ranging large…
digging up the nugget
relics of biodata;
disrobing the scandal
mummies entombed
in secrecy, furtively
whispered by
salacious caretakers

They disembowel
the viscera
of legends and tales;
their prying mattocks
of curiosity prise loose
gems of sly gossip
and the skeletal remains
of slander history hidden
within the stucco walls
girding the myth
of the personage

With their hand-brushes
of awe and veneration
they clean the interred
artifacts spruce and sleek,
secreting the souvenirs
into the knapsacks of their souls
in ecstasy of discovery.

Through devout exorcism
they spirit away the spectres
residing in dusty urns
lifting the stoppers of oblivion;
through customary séances
around tables of recall,
they release the wraiths
of the forgotten dead.

The tomb raiders range around
in all corners of the world
abbeys and churches
cemeteries and corners
graveyards and ghats
crypts and vaults
witness their silent exhumation,
their ardent necrophilia
as they dig up again and again
those in eternal rest.

The last word is never uttered.
The period mark never placed.
Even when the conversation ends
the last word remains unsaid.
Talks are punctured
by silent semicolons
Conversations hang
on the hooks of commas.
The lulls in the speech,
only hyphenated pauses.

The final word always remains unsaid.
It hangs like the unfallen dewdrop
at the tip of the leaf
refracting a thousand tints
at the intersection of the branch.
It remains between us –
unspoken, suspended,
Connecting one meeting with the next.
Clearing a pathway to another tryst;
Leaving the promise of a continuum
Even beyond death.
The unspoken final word is hope.

The Horses of the Night

The steeds of the night pass on
routing, rampaging,
snorting, stamping,
cavorting, cantering,
they pass on.

The forests of the night
wake and wonder
shake and shiver
quake and quiver
as they pass on.

The earth waits in terror
as they sprint and spring
trot and trample
stomp and stampede
as they pass on.

Our dreams in REM
toss and turn
burst and burn
whir and whirl
as they pass on.

The steeds of the night
gallop apace
gallantly in grace
sailing in space
they pass on.

Black stallions of the night
cut a curve and veer in flight.
Golden steeds of the dawn
outride swift the rosy morn,
as they pass on.

karuppurojakkal
Create a free website or blog at WordPress.com.